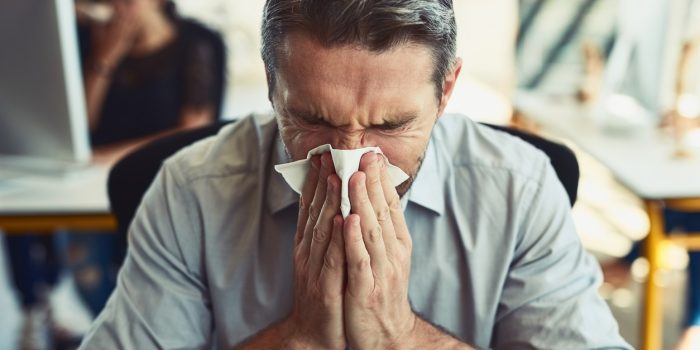 Employers are being warned that employees who show up to work when they’re sick could be costing their business, big time.

Workers who turn up when they’re unwell is known as sick pretenteeism, and according to a report by the Centre for International Economics, it’s costing the Australian economy $34 billion every year, and is one of the major causes of the spread of flu viruses.

Some employees feel pressured to keep working when they’re sick, because they have either run out of paid leave, or they fear a backlog of work when they return, or because they don’t want to let the team down.

The problem of presenteeism can be cultural in some businesses, according to Peter Wilson, chair of the Australian Human Resources Institute.

John Crothers, chair of Pathology Awareness Australia which commissioned the report, said workers sometimes don’t understand what is going on with their own health and well being.

“Yes, you’ve got a deadline to hit — but you want to do that in the understanding that your body’s in a position to be able to do that effectively, and not underperforming and not spreading something that might actually be contagious,” he told Smart Company.

Most workers say they go to work sick

A YouGov poll of 1,000 Australian workers, found that two-thirds of respondents (66 per cent) expect to go into work sick this winter.

More than half said they would have to be “really sick” to take a day off work.

The findings show that while workers know that going into the office when they’re unwell is a bad idea, they still do it anyway.

More efficient for workers to stay home when they’re sick

General Practitioner Doctor Miriam Brooks told ABC Life there are good reasons for your workers to stay home if they have a cold or flu.

“One is to rest and recover, in which case people should be guided by their symptoms — fatigue, fever, feeling unwell,” she said.

Another reason for workers to stay home is to avoid making others sick.

And those who keep working when they’re sick, are more likely to take longer to recover.

“It’s just more efficient for everyone to have a proper rest and recover more quickly,” Doctor Brooks said.

An employee can take sick leave when they are ill, or injured, and it can be paid or unpaid.

Workers have an obligation to tell their employer when they are sick, according to industrial relations expert Miles Heffernan from Employwise.

“If your employee is unwell, they must notify you as soon as possible, and let you know when they think they might be able to return to work,” he said.

As an employer, you are entitled to request proof that your worker took time off because of illness, in the form of a medical certificate from a doctor or pharmacist, but Mr Heffernan advises employers to encourage their workers to stay home if they’re sick.

“The last thing you want is for someone to come into the office coughing and spluttering – not only won’t they be performing at their best, but you also risk them infecting the rest of your team,” he said.

“If someone has a cold or a flu, the best thing to do is to encourage them to stay home so they recover more quickly, and so they don’t spread their germs around.”

If you need assistance with a workplace issue, we can help.

Please call our specialist team at Employwise today on